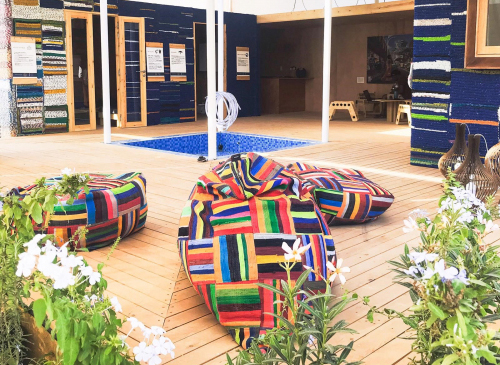 THE ESSENCE of this story is about imagination, inspiration and co-creation. Eighteen months ago, Team Mahali embarked on a journey to design, construct and operate a net-zero-energy house tailored for the African context.

“At the beginning of last year, while studying my Masters in Sustainable Development at the Sustainability Institute (SI), I submitted a design proposal to the Solar Decathlon Africa 2019 competition. A month later the proposal was selected to form part of the top 20 teams. The brief was to design a single storey house, not bigger than 90sqm for 5 people. Our house was 66sqm of habitable space and another 60sqm of outdoor space.

We were the only official team from Sub-Saharan Africa. The main entry was from the SI and the Stellenbosch University (SU) and later collaborations with the Centre for Renewable and Sustainable Energy Studies and the SU Solar Thermal Energy Research Group. The UCT School of Architecture, Planning and Geomatics were also involved.“ Sharnè Bloem, Project Initiator.

Our design builds on the symbolic value of a tree and our mission was to build a handmade, self-powering house, adapted for the rising challenges posed by the second wave of urbanization, shrinking resources and the rising dangers posed by climate change. The African continent has many ancient stories to tell; these stories are generally passed on orally from one generation to the next, typically under a tree or a fire. Under this tree, knowledge and artesian skills can be transferred and diffused intergenerationally. This not only brings wisdom to our continent but also colourful art that could be used for sustainable building designs.

Light in its impact, bright with its technology and grounded in its context. Our vision and mission is to create a modular and scalable structure with potential for physical transformation according to community needs. This includes: a shared space, where individuals can address unemployment, to gather and share experience, creativity and wisdom. The Mahali house is affordable and innovative, a house suited for the African context.

This is done by strongly emphasising the creative circular usage of resources, biomimicry and nature-based design for regenerative housing. Blending, breaking and bending ideas ranging from cutting edge solar technologies, the principles of green building design and the usage of local materials we imagined a design unlike any other.

Mahali was designed with both people and nature in mind. We emphasised the social externalities of recycling and upcycling to create employment, collaborations with initiatives such as The Plastic Project and Ashanti Designs. The main architectural attributes are as follows:

For ease of shipping (both for the competition, but also for implementation throughout Africa), we decided to use a single, standard, recycled, side-opening shipping container without any structural modification. The entire house with all its parts can be packaged and shipped in one box with the box forming part of the completed house.

The layout is a traditional courtyard typology found in many African regions: From dwellings arranged around a central cattle enclosure, to the traditional Ashanti dwelling and Moroccan riad. Frequently, central courtyards have had a central water feature for cooling and aesthetic purposes. People have used this layout for many centuries because of its exceptional performance in terms of climate control, security, privacy, flexibility and adaptability.

The tensile roof functioned as a second ceiling. It passively cooled the entire footprint of the building, while allowing the building to breath and natural light to enter. The entire house was raised with local timber studs, further contributing towards the buildings’ breathability. This also means the structure did not require a concrete foundation and no water was required in the construction process.

Mahali’s African inspiration stretches beyond the borders of conventional design. Playing on this symbolism of a tree as described above, we adopted an approach of biomimicry to shape the structure of our house. Mahali’s notion of a tree is a steel frame that could be made out of recycled cars. Similar to a tree, our structure provides passive cooling and shade for the building, with photovoltaic panels as “leaves”, providing energy. The biomimicry inspired structure also channels rainwater into a central harvesting tank; further contributing to passive cooling. This can be used for the organic food garden as well as cleaning the deck and solar panels.

Following a solid foundation and frame to work off, the finishing touches are paramount in emphasising the Mahali philosophy; dancing with the dynamics of circular resource usage to the rhythm of socioecological creativity. The finishes include our upcycled façade for the living area and exterior of the container. A colourful façade was made using a cladded labour-intensive material made of recycled plastic packaging. Considering the need for skills building and job creation, our team found an innovative way to promote a sustainable combination of recycling and traditional crocheting techniques. This was done in order to provide income generation for unemployed and underemployed local craftspeople. The façade made use of approximately 6900 recycled plastic bags. The abundance of old plastic packaging makes it a free material and using it in building contributes towards pollution mitigation. These panels were crocheted by a group of unemployed women near Stellenbosch, providing much needed income. The cladding was fixed to the OSB panels with staples. The internal finishes consisted of plywood and OSB boarding, giving it a rustic yet contemporary feel. 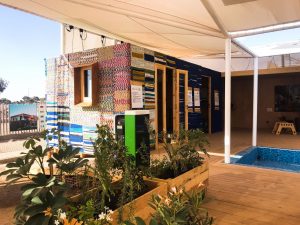 “SDA 2019 was like a hurricane and a furnace all at once! A furnace, because in 40 plus degrees Celsius you feel like you are melting and boy, things got heated! On a good day the constructing of a house is a rather intense experience, especially within a 3 week timeline. Constructing a house with no budget, a language barrier, in another country, with the lack of urgency from sub-contractors and with 95% newbies on site, things can come flying! Against all odds, we did it in a record time and took part in a very draining and intense competition. Especially for those who were still washing the construction dust from their hair while facing the next jury contest in competition mode. We were also by far the smallest team but with the biggest and bravest hearts! I am so proud of us!” – Sharnè Bloem

The Solar Decathlon (SD) is an internationally renowned university competition. Schools of architecture, engineering and sustainability are challenged with developing a sustainable single-residence household that is fully powered by the sun. Raising the bar of tertiary education standards, students are encouraged to apply their two-dimensional knowledge to a real-world three-dimensional scenario. Richard King, the founding father of the SD, explains that by the mid-2000s students started to integrate more dimensions of sustainability, apart from energy but including decentralized water, waste and food systems into their design submissions. Since then the competition has naturally evolved into a “sustainability contest”. The SD provides the opportunity to gain invaluable practical experience, which no exam, essay or assignment could do. The SD is a truly transdisciplinary contest and requires one to stretch out of their comfort zones; intellectually, physically and interpersonally.

We had eight pre-competition deliverables during 23 days to construct the house in Benguerir, Morocco. The last 15 days we had ten sub-contests, with six being jury visits of esteemed panels in their respective fields. These were international panels of architecture, engineering, innovation, sustainability, market viability and communications. The four monitoring contests consisted of climate control, lighting intensity, hosting dinner parties, racing e-cars, boiling water, washing dishes and other daily domestic tasks.

Team Mahali scored an impressive 75% average across all ten competitions. The score highlights include 96% in the architectural contest (finishing 2nd), and 85% in the sustainability contest (finishing 5th). In all three categories of Communication, Engineering and Innovation we came 7th. Unfortunately, with some technical issues, our four monitoring sections dampened our chances at finishing in the final top ten.

The Mahali house and the Solar Decathlon functioned as an excellent means of prototyping, proof of concept and harnessing all of our abilities at working with the emergent properties of an interdisciplinary ideas funnel. It helped breathe life into a concept that was purely focused on solving urgent socioecological challenges. After a gruelling construction phase, the Solar Village was opened to the public for an exhibition phase. This served as an important point of diffusion between academia and policy formation, to promote the development of socioecological construction and acceptance of clean energy. It allowed participating students to delve into the depths of regenerative design, stretching their own as well as the public’s imaginations into a better future.

The team contributed towards reconceptualising the collective mentality and educating thousands of people about the economic, social and ecological benefits of net-zero energy housing. The Solar Decathlon can be likened to a contemporary Futurama by Norman Bel Geddes; an open exhibition created by the young minds of the world to practically demonstrate what a futuristic post-fossil fuel community could look like.

“This competition taught us all so much, that it was difficult to remember everything we learned. Nevertheless, I learned how to adapt and overcome any obstacle that is thrown my way, make use of the resources that are available to you and probably the most important, that we can accomplish much more than you think – especially when every member uses their speciality to the best of their ability.” – Zak Liebenberg

“From walking around town in the scorching Moroccan heat in search of a specialty cable, impromptu midnight dance parties, to negotiating the price of a fridge in broken Arabic, the Solar decathlon was, for me, a chaotic, exhausting and incredibly fulfilling experience. “- Tasneem Jhetam

“Through all of this I have grown as an individual and as an aspiring architect. Building a life size version of our efforts is exactly the opportunity I wanted. On top of that, I learnt so much about sustainable design and living; lessons that I have already taken into my personal life and will promote in my career as well. “- Sisonke Mgwebi

“The dust has settled, the Moroccan sun has set, and all that remains is the Team Mahali home. Oh, I forgot to mention, we built a full-scale net zero energy house! Over the course of the next month I would gain exposure to interdisciplinary teamwork towards a sustainable initiative, authentic culture-sharing between local and international students, interpersonal skill development via the house presentations and most valuably – a lifelong appreciation for tagines and mint tea. I may be back in SA now, but I’ve returned as a more holistic student and human-being with a global network of friends.“ – Argon Poorun

“Having been a part of team Mahali from the early stages of brainstorming the conceptual design for a net-zero energy home to the closing ceremony in the newly built solar village in Ben Guerir, Morocco was a truly rewarding experience. While the design process in South Africa was extensive, nothing could have prepared me for what was to come during the actual construction phase of the decathlon. I was faced with many new challenges having never worked on a construction site before and long days in 40 degree heat just made it that more gruelling, but rewarding nonetheless. The shift between the physically intensive construction phase to the competition phase was more challenging than anticipated. Having gone from late nights trying to finish the house straight into giving tours of our newly completed net-zero energy home, barely gave anytime to actually process all that was achieved in a mere two weeks. “– Yumna Parker

“It was an adventure and a half. Long nights and early mornings. I never thought I could survive that long with so little sleep. Building a house, in a place we’ve never been to before, without having local contacts was a huge challenge. We never know if people were ripping us off or if they were genuine.” – Natheera Ravat 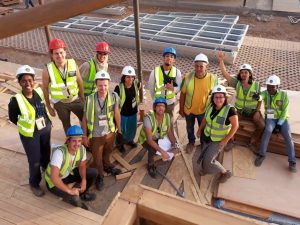 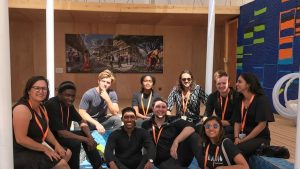 For further information or collaborations please view our website and social media pages for upcoming events and talks.