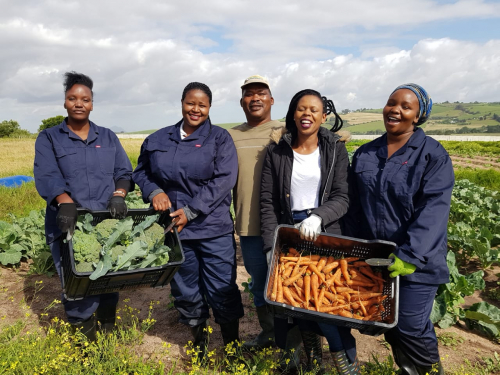 Growing a new story about food

There is a need for a new story in South Africa around how we grow, distribute and consume food. About a quarter of households across the country run out of money to buy food every month. As a result, many of the country’s children do not eat enough nutritious food to develop their bodies and minds to full potential. Spier, the Sustainability Institute and Woolworths are determined to shift this dynamic in the Lynedoch community. They are collaborating on an innovative, experimental three-year pilot project at the Living Soils Community Learning Farm at Spier, just outside of Stellenbosch.

“We want to showcase the value of ecologically regenerative food production to a broad audience,” notes the Project Manager Rirhandzu Marivate, “while ensuring food and nutritional security for those children who attend our schools.” The three interns who work on the farm were drawn from the Institute’s Academy, and work under the direction and supervision of the Living Soils Farm Manager, Eric Swarts, who has a wealth of knowledge and nearly two decades of experience in sustainable farming. Vuyolwethu Zicini, Phuthuma Mgu, and Thandiwe Precious Mtyingizani were accepted from more than 300 applicants for the rigorous four-year agroecology training course in 2017. All three women originally hail from the Eastern Cape and moved to Cape Town in their late teens and early twenties. They applied to the Academy to gain the skills that would enable them to create stable and rewarding livelihoods. The women completed the two-year theoretical training end-2018 and started their practical training on the farm this year. They will remain a part of the three-year pilot project.

The project aims to produce nutrient-dense food for local consumption and the first harvest in November will be channeled into the Institute’s school feeding scheme. This scheme provides daily meals to about 200 impoverished and at-risk children from the Lynedoch Valley community that attend one of the schools at the Institute. It also aims to provide practical training and learning opportunities for young and emerging farmers. The Agroecology Academy provides both theoretical and hands-on learning and students exit with NQF4 accreditation. Thandi, who plans to return home and boost food production in her community, says that “I am proud to be learning how to be a farmer and to produce food for people.”

The Living Soils Community Learning Farm will also attempt to address challenges around access to land for agriculture in the region and high levels of youth unemployment. Spier is both a funder for the Agroecology Academy and a home to the Living Soils Community Learning Farm. Heidi Newton-King, Human Resources and Sustainability Director at Spier, says, “through our Growing for Good initiatives, Spier supports communities through learning. By contributing land and resources, we look forward to exploring the development of a long-term impact model.”

The project could also develop skilled talent that could be absorbed into larger supply chains. This would help improve the status of the agricultural worker in South Africa and attract more people to farming as a career.

Woolworths has come on board with funding of R4.4million over the three year period. Woolworths Director of Corporate Affairs Zinzi Mgolodela notes that the partners “share the vision of the Living Soils Community Learning Farm becoming a viable model of community-based food security and the sustainable development of local livelihoods that can be replicated all over South Africa. The project is aligned to our successful Farming for the Future initiative, therefore, an extension of partnerships with our suppliers.”

The project’s innovation lies in its collaborative approach between a corporate food retailer, a supplier of theirs, and a non-governmental organisation, which addresses multiple challenges simultaneously – training in sustainable production, access to land and markets for future smallholder farmers, as well as the critical need to supply children with the nutritional food they need to thrive. The Living Soils Community Learning Farm also provides interns with the opportunity to not only test their theoretical knowledge but also to continually research and adapt their approach to get the best results from a particular ecosystem, microclimate and soil structure. This ability will become increasingly valuable as climate change impacts growing conditions across the country. 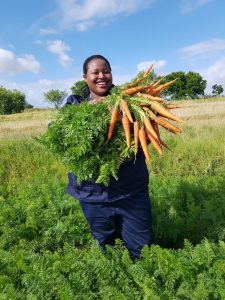 The Living Soils Community Learning Farm is also a space where a new story around food security and nutrition is being developed. While the farm acts as a physical showcase for ecologically friendly food production, it is the interns themselves who act as passionate advocates of sustainable farming. Vuyo notes that she is already spreading the word among her extended rural family in the Eastern Cape about the need for and methods of agroecological production, including sustainable water and pest management. For Thandi, the way in which she views the relationship between people, land and food production has shifted significantly since starting her training, and she talks to anyone who will listen about the need for good nutrition. Phuthuma, who had a small-scale spinach growing operation before entering the Academy, notes that “I love growing food and I love feeding people especially as I now know more about nutrition and what is good to eat.” “We must educate people more about which foods to eat for good health,” says Vuyo, “most sicknesses come from what we eat or don’t eat.” Phuthuma is documenting her training by taking photographs on her phone and sending them back to her family, who share her knowledge with others in the community. Thandi’s mother is a smallholder farmer and follows her daughter’s training in agroecology with keen interest, impressed by her daughter’s new-found technical knowledge and ability to advise on their local agricultural systems.

The interns are provided with ongoing theoretical and practical mentorship. They remain students of the Agroecology Academy and meet every Friday with permaculture expert Yoliswa Mahobe, the training facilitator from Living Soils, to talk through any challenges, research new ideas or applications, and map their next steps. On the farm, they are supported by Eric and Spier’s farm manager Orlando Filander, as well as Woolworths’ Farming for the Future expert Kobus Pienaar when required. The interns note that farming is hard work and requires dedication and discipline but that the rewards are more than financial. “We mustn’t look down on farmers – they grow the food we need for survival,” says Thandi to her friends and family, “the thought of going back to where I came from and growing food makes me happy, especially if I can change people’s lives.” Vuyo envisions her future as a farmer combined with a tourism offering like a bed and breakfast. Phutuma notes while she will stay in Stellenbosch and expand her spinach business to include other vegetables, she will also invest in reviving her grandmothers’ land back home to provide livelihoods for her brother and his family.

These ladies are dreaming big, as is the Living Soils Community Learning Farm with its vision of training and upskilling many more unemployed youth while also providing locally grown nutritious food for early childhood development centres in the Stellenbosch area.