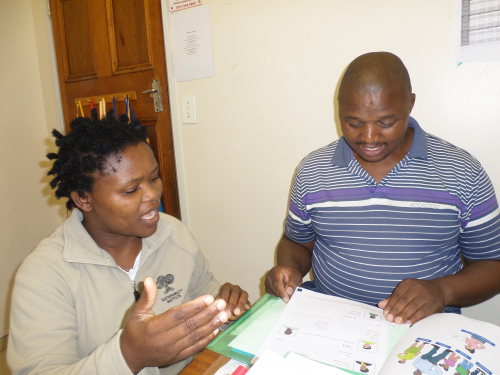 Pictures worth a thousand words

The Lynedoch Children’s House situated at the Sustainability Institute in the Stellenbosch winelands, has partnered with Creative Contracts to pilot the first ever Comic Contract for a school environment in South Africa.

Instead of giving parents a text heavy contract to parents for signing, which requires a lot of explaining, the school can now provide parents with a legally binding Comic Contract that is easy to understand. In a comic contract, the parties to the contract are represented by characters, and the terms of the agreement are captured mainly in pictures. The parents (or guardians) and teacher (or school) sign the comic as their contract. 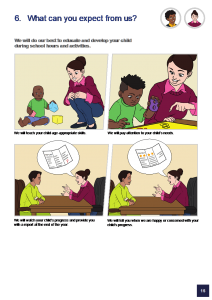 Comic contracts were developed by Robert de Rooy, a South African attorney with 20 years of commercial law experience. “The idea was born out of the frustration of spending so much of my working life having to read and write text heavy contracts that most people did not want to read, or could not understand. While researching, I came across the work of Finnish lawyer, Helena Haapio, who wrote about using pictures to explain text in a contract. This was great, but I realised that this would prejudice people who are not very literate, as they would still be legally bound by the text they could not understand, and not able to rely on the pictures which they did understand. So I wanted to see if I could create contracts where the pictures do most of the talking, so that vulnerable and people with low literacy skills can easily understand their contracts. A contract with pictures is more engaging, and it does not matter what your first language is, because pictures is a universal language,” explains de Rooy.

Comic Contracts were initially created for temporary farm workers to easily understand the contracts that they were expected to sign. Since the release of the first contract in May 2016, Comic Contracts have been developed for many other purposes, such as consents for medical care, consents for being filmed, contracts to invest money through a broker, contracts for receiving a grant, a non-disclosure agreement, a license agreement for ice cream sellers, etc.

The Lynedoch Children’s House is a Montessori preschool environment that is pioneering transformative learning in early childhood development with a special focus on supporting community development in under-resourced communities. “We realised that not all of our parents understand the text contracts they had to sign each year. As importantly, parent involvement in their children’s education is vital.  Research has overwhelmingly shown that investing in the earliest years of a child’s development have significant returns and supporting parent involvement in these formative years of learning is tremendously important. The partnership with Comic Contracts has allowed us to respectfully engage our parents in not just their responsibilities, but also to deepen their understanding of the learning approaches for their child. Piloting these contracts with our preschool has had a deep impact on the immediate community of the Lynedoch Valley while having the potential for a far reaching impact through our research and our sister teacher training academy, Indaba Institute, which can take this important innovation to scale,” says Dr Jess Schulschenk, director of the Sustainability Institute.

All the teachers were trained on how to explain the contract, before the parents could receive the new Comic Contract. “The teachers were extremely excited when they saw the new contract, and engaged with it easily and positively. They felt that for the first time, they were able to confidently explain concepts and expectations to parents in a manner that the parents could fully grasp and understand,” comments Colleen Erasmus, Lynedoch Children’s House principle. An additional benefit is that Comic Contracts made these contracts available in English, Xhosa and Afrikaans. The contracts will soon also be available through a mobile app, allowing the school to send it to parents to read the contract on their phone, with a voice over explaining the contract in their preferred language, and sign the contract on their phone.

The response from parents were equally positive, as they asked more questions, could understand easily what is expected, and engaged more with the teachers about these expectations. “The parents did not feel intimidated or patronised by the contract; instead they were excited and realised the importance of understanding their agreement with the school, for the benefit of their child,” says Erasmus.

“Lynedoch Children’s House is situated in an area with challenging economic and social conditions, and we felt that we wanted to see how we could help the parents understand what they can expect from the school and what the school expects from the parents, and how the parents can positively interact with the school for the benefit of the children,” says de Rooy.

The legal language within contracts is difficult for most people to understand, whether a person is literate or illiterate. In order to afford vulnerable people the dignity of understanding a contract they need to sign, it must be easy to understand. Comic Contracts enables everyone to make informed decisions, regardless of what your first language or level of literacy is. “Pictures are worth a thousand legal words.”

Comic Contracts have gained wide-spread attention and recognition in South Africa and abroad. Robert won the IACCM’s 2016 global award for contract innovation in San Diego, and in February 2019, receives support from the German Ministry for Economic Cooperation and Development and from the Hague Institute for Innovation in Law, and received the 3rd prize in the recent International Access to Justice forum, held in the Hague, Netherlands. The contracts are available in paper form, either as a booklet, or as a normal printed document. For more information, visit https://creative-contracts.com/. We invite interested people to come and view this contract at the Sustainability Institute in Lynedoch. Please contact us at 021 881 3500, visit www.sustainabilityinstitute.net or email info@sustainabilityinstitute.net 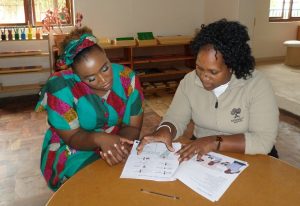