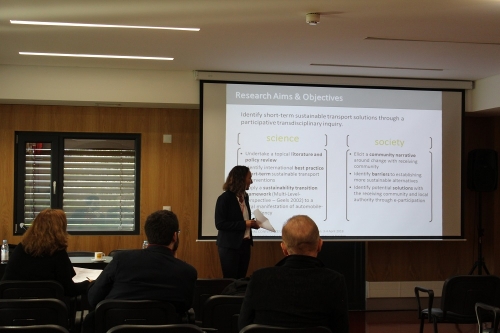 A smart city conference in an old city

I found myself in the beautiful city of Lisbon, the capital of Portugal, for a few days in April. This city has a mesmerising charm with its walkable streets, patterned cobblestone pavements and buildings adorned with decorative tilework, a practice dating back to the Moorish rule in the 15th century.

I learned that the city made a remarkable recovery after one of the most severe recorded earthquakes in the world’s history that flattened the inner city in 1755, followed by a devastating fire and subsequent 25m tsunami.  It took years for the country of Portugal to recover from this tragedy, but it did make way for visionary urban planning, which included the rebuilding of the city with bigger public squares and rectilinear wider streets and the earliest seismically protected structures in Europe.

This city was thus a fitting setting for the 3rd International Conference on ‘Urban e-Planning’ (3-4 April 2018) hosted by the University of Lisbon’s Institute of Geography and Spatial Planning and the International Journal of E-Planning Research.  The aim of the conference was to investigate, debate and present novel theoretical and empirical research on Urban e-Planning.  Lisbon was once again the focus of innovative thinking around the resilience of urban spaces in the face of environmental crises, with the use of existing and new technologies.

The conference was organised around two key themes namely a) Smart cities: Governance and Planning and b) Citizens e-Participation and Collaborative Planning.  Having recently completed my MPhil at the Sustainability Institute, I submitted an abstract based on my thesis as it aligned well with the second theme. In this study, I explored short-term solutions to automobile dependency in an urban enclave in Cape Town (South Peninsula), through using the Transdisciplinary Research Design methodology.  This methodology allows for the co-generation of new knowledge by involving a diverse mix of research participants and stakeholders that have an interest in the topic and specific spatial context. I augmented this approach by encouraging residents to participate electronically (e-participation) via a purposive social media group (Facebook).  I elicited discussion around solutions on this group and in turn studied the discussion using netnography, a research technique used to study online communities.  Using e-participation in this manner must have sparked the convenor’s (Carlos Nunes Silva) attention as my abstract was accepted for this conference.

Day one of the conference was focused on the Smart Cities and e-Governance theme. Prominent urban planning academics from around the world presented on various aspects of this theme, posing some crucial questions around how the smart city ideology can benefit people. It generated lively debate around new smart city projects, such as the smart neighbourhood proposal on a 4,8ha waterfront property in Toronto, Canada by Google’s new urban planning division, Sidewalks Labs, in partnership with the local authority. I, for one, will be following this  ‘smart’ infill project, known as Sidewalk Toronto – or as a delegate put it this ‘big experiment on people’.

What struck me from all the presentations was that urban planners see the benefit of smart technology in city governance (e-governance) but are reluctantly embracing smart city technologies when it concerns service delivery. Where does people fit into this ideology, especially if the service is supplied by big corporates? Is it coming from a place of…’of the people, by the people, for the people and with the people’ or are we merely sources of data?  If it is the latter, who owns this data and what are the implications if it resides with the local authority or in private hands? Smaller municipalities might opt to have big corporates install smart technologies for cheaper than they could develop it, but might not be aware of the data agreements they sign. The phrase ‘data is the new oil’ was raised numerous times during the first day.

The second day showcased innovative research on e-participation and community engagement.  There were a number of papers on public participation geographic information system (PPGIS) that allows citizens to contribute local knowledge via online mapping tools.  This was fascinating as I am a staunch proponent of GIS, having used it almost daily as an urban planner.  In the context of Cape Town’s drought and the new normal of dying yellow lawns, Rhiannon Crain’s (Cornell University, USA) presentation about a citizen mapping project was captivating.  This project, Habitat Network, allows citizens to map their own gardens (yards) to show others how normal gardens can be transformed into buzzing habitats for organisms – thus moving away from the conventional green lawn aspiration.

My talk was well received by the audience despite the stark difference in context compared to the European and Asian contexts that featured throughout the conference.  The use of social media in my research was applauded while a delegate asked whether electric cars can be an alternative in the Cape Town context.  This last question highlighted this difference in context, as my research showed how electric mobility is still very much a niche at the moment.

There was plenty of time scheduled for networking around great coffee and the famous Portuguese pastries, especially the Pastéis de Nata, yum.

Here I am with three dynamic speakers. From left, Abril Herrera Chávez (University College London) originally from Mexico who presented her PhD research that focused on the impact of internet connectivity on a rural area in England (Cornwall). Eline Punt (Utrecht University, Netherlands) presented on smart urban governance in the Netherlands and Marcela de Moraes Batista (Pontifical Catholic University of Paraná) from Brazil presented her PhD research on the relationship between ICTs and intelligent urban planning in the city of Recife, Brazil.

This experience left a lasting impression on me as I thoroughly enjoyed learning from my peers and fell in love with the city of Lisbon and its intriguing history.

Thank you, Lisbon … I will be back.