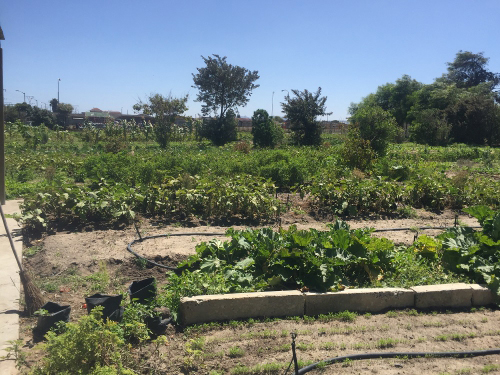 Sowing seeds of trust in our food system

On Saturday 25 February, I spent the morning at Asande Food Garden, Gugulethu, with a group of inspired farmers, activists and academics. Asande is located opposite Nyanga Junction on a busy road filled with people, informal taxis, vendors and goats -munching on the leaves growing on the boundary fence of the farm. Entering into the green food-growing space of Asande, it was in direct contrast to the busy and noisy urban environment outside the fence, although the hooting on the road could still be heard.

The morning began with Sibongile sharing his story of how he came to be a farmer at Asande. Sibongile has been involved with Asande for nine years and is currently the main farmer, helped by Ntombesine and Vuyokazi. In 2008, he was unemployed and whilst walking in the area, he saw a lady and an old man through the boundary fence, working hard on this plot of land. He approached them and asked what they were doing, to which they replied: “We are staring a garden!”. He then offered to assist them in the garden by cleaning, digging trenches, feeding the soil and then planting. A couple of years later the two individuals who initiated the farm left to pursue other activities, leaving Sibongile in charge. When I asked Sibongile why he has stayed at the farm after all these years he stated, “It is inspiring, something in my heart. I can see what I am doing and I have something for the table”.

The farm currently grows 38 varieties of plants including herbs, lettuce, spinach and peppers, all irrigated with borehole water. This produce is sold through Harvest of Hope, an organic box scheme. We were there to discuss the Participatory Guarantee System (PGS) for this site. PGS is a process whereby different members of the food system come together to discuss and assess the organic and ethical practices of a specific farm.

There are no South African-based organic certification bodies, and farmers wishing to be certified in this country have to pay extremely high fees to third-party certifiers from abroad if they wished to be audited for the chance to have an ‘organic’ logo on their produce. PGSs are thus a particularly relevant alternative in the South African context and give smaller urban farms such as Asande, the platform to show that they uphold organic and ethical principles. In a PGS, customers and other farmers act as ‘the auditors’ and inspect the farms themselves.

PGSs can therefore be more collaborative, and provide opportunities for the farms involved to improve their organic practices. Our visit was treated as the first step in the journey to achieving PGS approval, which helped to create an open dialogue so that farmers could raise problems they were facing. When a question or concern was raised the group listened intently, and responded with practical advice. Sibongile raised challenges such as the need for different pest control methods that still aligned with organic principles. Current pest control methods used on the farm include spraying a garlic-chilli mixture or liquid Sunlight soap or liquid paraffin. However, certain visitors questioned the use of Sunlight soap as its formula has been modified over the years, which led to the call for further research on acceptable pest control methods.

The PGS also facilitates knowledge exchange between different stakeholders. At the visit, we discussed strategies to increase the profitability of the farm. These strategies included further diversification of crops to open up new markets, closer planting of current vegetables and the need for more detailed long-term planning and record-keeping. During this discussion, other urban farmers huddled closer together to listen, as they felt they needed to hear these strategies as well. Examples of crop diversification include rape, kovu and harvesting of pumpkin and beetroot leaves to meet the demand from immigrants. To help compete with conventional farmers, a suggestion was made to overproduce by an average of 20 percent on existing off-take agreements so that the smallholder farmers can sell to the open market at a more competitive price. Composting on-site was also suggested to reduce operational costs.

I found this visit an exciting example of citizens taking back control of their own food systems. It was inspiring to witness how organic certification can be a more participatory, trust-filled and affordable process than the original third-party model most of us are used to.

For more information about PGS visit http://www.ifoam.bio/en/pgs-basics. Anyone interested in sustainable farming can attend these visits, and to find out about the next PGS visit go to https://www.facebook.com/WCFPGS/.