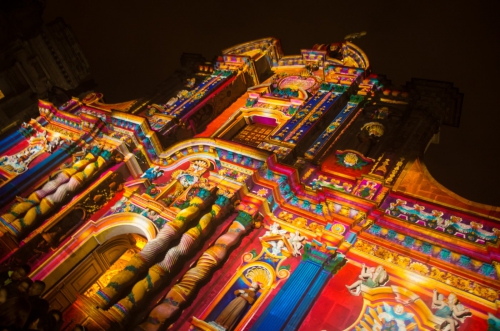 Habitat III, the United Nations Conference on Housing and Sustainable Urban Development, took the city of Quito, Equador by storm from November 17 to 20 2016, with attendees filling the Casa de la Cultura between Quito’s old city and the Mariscal. Paul Currie, a researcher with Urban Modelling and Metabolism Assessment, the Centre for Complex Systems in Transition and the School of Public Leadership at Stellenbosch University, South Africa, participated in the conference and offers some reflections.

Quito made a perfect setting for the conference, given its location in the global South, equipped with precarious cliffside housing, urban sprawl, limited highways, buses and cars spewing exhaust, an abundance of street vendors and a spectacular mountainous location in the midst of four active volcanoes. The concept of disaster resilience is quite apt, given the 1999 eruption of Pichincha volcano covered the city in ash.

The city was also in the middle of it’s fiesta de la luz, drawing thousands of Ecuadorians to see the light shows projected on ornate churches – though such a description does no justice to the spectacle. As with any of these large events, the city takes on a new electric life and we’re left unsure if this is how it normally feels to wander Quito’s streets.

The conference drew together over 25000 single-day attendees of a rumored 45000 registrants. These attendees were united by a fascination with the form, processes and relationships of cities, and the starting point for most discussions was a unified acknowledgement that cities face challenges and that cities are the key to addressing global socio-economic and socio-ecological issues. From there, the points of divergence are the different language we use to describe these challenges, and the varied perspectives, approaches and agendas proposed to address them.

The 20-year latency between Habitat Conferences (the previous ones took place in Istanbul in 1996 and Vancouver in 1976), means that the global context has shifted drastically, and the world is in need of a renewed focus of its development priorities. This is seen by the recent concentration of mega-events that have resulted in the Paris Agreement, Sustainable Development Goals (SDGs) and the African Union’s Agenda 2063 to name a few.

Habitat III created a forum in which we could question together how cities have been developed, both as shining beacons of human ingenuity and creativity, and as structural enforcers of inequality and exclusivity. With this in mind, many note that the New Urban Agenda, the centerpiece of the conference, will not work if we overlook global and local inequity. The New Urban Agenda acknowledges a wide range of systemically discriminated groups including ‘women and girls, children and youth, persons with disabilities, people living with HIV/AIDS, older persons, indigenous peoples and local communities, slum and informal settlement dwellers, homeless people, workers, smallholder farmers and fishers, refugees, returnees and internally displaced persons, and migrants, regardless of migration status’.

While the NUA has a very clear desire to promote sustainable urban development, as visualised by the word cloud above, it is critiqued for not establishing its own targets or a means to measure the success of it’s many suggested interventions. What’s more, while it effectively stands as the embodiment of SDG Goal 11 to make cities and human settlements inclusive, safe, resilient and sustainable, it is very poorly connected to the goals and targets in the SDGs. This is highlighted as a missed opportunity by David Simon, of Mistra Urban Futures, in a conversation about the Habitat process. The power of cities as concentrators of people, welfare, innovation, as well as social diseconomies (crime, disease, poverty, inequality) and ecological impact, makes them the almost perfect levers for propelling global sustainability as embodied by many of the 17 SDGs.  However, successful implementation of the NUA will be left to the interpretation of its broad rhetoric by local and national actors, many of whom are under-capacitated. Despite this, Simon explains that the NUA is the first UN document to ‘recognize the critical role of sub-national authorities and non-state actors’ – a major achievement for the UN system.

The Sunday before the conference began, a Mayors assembly shared voices from the heads of cities, which I felt set the tone for the conference and highlighted the varied nature of urban challenges and priorities worldwide. These desires were voiced in the buzz-words plastered around the conference, calling for cities that were sustainable, resilient, smart, participatory, inclusive, and in the multitudes of presentation and exhibitions throughout the conference.

With the adoption of the NUA, the global urban reality is unquestionable, and along with it, the manifestation of all urban challenges, intrigues and speed bumps. This is specifically important for African nations as before the Habitat III process, there was a prevailing denial among many governments on the continent that urbanization is happening, that it is caused by natural growth, or that it could deliver social and economic benefits.  This denial may have been the most limiting obstacle facing urban practitioners, as urban policies would be missing vital tools, or focus primarily on anti- or de-urbanisation mechanisms. With acceptance of an urban reality, what now remains is for governments, through engagement with other stakeholders, to embed the ideas of the NUA in national agendas and develop local targets for developing just, sustainable cities.