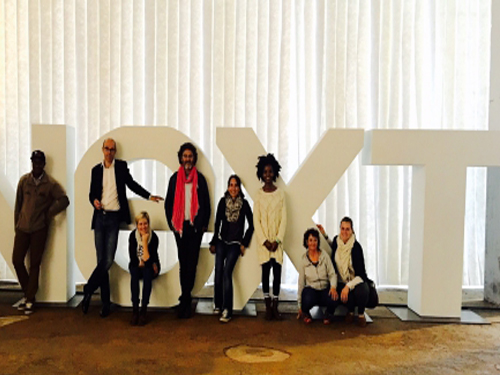 The SI’s Changemaker Programme, which endeavours to equip students with the knowledge, tools and skills to become leaders of change, recently took a group of PGD students to the Netherlands for the International Architectural Biennale Rotterdam (IABR), for an intensive three-day immersive learning experience.

Although the IABR is an architectural biennale it really moves beyond the spatial paradigm of architecture to try connect designers, academics, and thinkers with decision-makers, politicians, the private sector, and of course the public. With 80% of mankind predicted to live in cities, and 90% of all wealth being created in cities, it is essential to create spaces in which the effects of these trends can be debated and understood.

The IABR is one of these spaces.
It is clear that if we want to transition to a more equitable and sustainable future we will have to adopt a new economic system that moves us beyond the neoliberal paradigm. This is the fundamental proposition of the Changemaker Programme in which we try to imagine what such a new system could look like and what our individual and collective roles are to turn this imagined future into a reality. Thus, the theme of this year’s IABR was very pertinent to our programme as it was all about “The Next Economy” and investigated the relationship between spatial design and the future development of the economy.
Vanessa von der Heyde, who coordinates the Changemaker Programme, led this group of 5 PGD students with the assistance of Prof Mark Swilling, who was the co-curator of the IABR. Although the students are from various different backgrounds that included architecture, but also urban planning, arts and culture, communications, and working for non-governmental organisations and entrepreneurship programmes, they all found aspects of the exhibition relevant to their work and future research ideas. The diversified backgrounds also led to an enriched learning experience with each student contributing from a unique perspective on what they encountered at the exhibition.

The exhibition not only challenged the current economic model of neoliberal capitalism, but also the dominant narrative of the “Smart City” that is posed as a solution to all the challenges that society is currently tackling. The Smart City narrative proposes technology as a solution to current societal and environmental problems and is driven predominantly by big corporates that see business opportunities in this particular future. The opening exhibit was a virtual reality (VR) that explored what this kind of “Smart City Future” would look like, and it intended to stimulate thought as to who would benefit and profit from this. A quote by William Gibson above the VR read, “The future is already here, it is just not evenly distributed”. Would a Smart City future really be any different from our current inadequate reality?

The exhibition then opened up to a wide range of projects that explore future scenarios for cities, showcasing a collection of initiatives taking place around the world that tell a different story to that of the Smart City. The question asked by the exhibition’s curator, Maarten Hajer, is what steps can be taken towards a Next Economy. What will bring about an economy that will retain more value in the city itself by adding value locally rather than the extractive economy we currently operate in, which only makes citizens dependant bystanders, categorised as consumers. In short, what will bring about an urban economy that is guided by the social agenda?
The exhibits helped the group imagine a city that runs on clean energy, that is solidarity-oriented and socially inclusive, and that is productive and focuses on the public domain. In this way the IABR helps the viewers imagine an alternative future that they can run with after the Biennale. It is a source of imagination and inspiration for what we can create.
The agenda for the three intensive days in the Netherlands included assignments, lectures, and various tours both of the exhibition and of cities like Amsterdam, as well as structured discussions and networking opportunities. The take-home message for the group was that there is an alternative to the fast-growing inequality we are seeing, and that we do not have to accept unsuitable narratives that seem to dominate the “what’s next” debate.
The future is ours to imagine and ours to create! Now the real work begins of figuring out what our own roles are in proactively working towards the next, socially inclusive, environmentally beneficial economy.