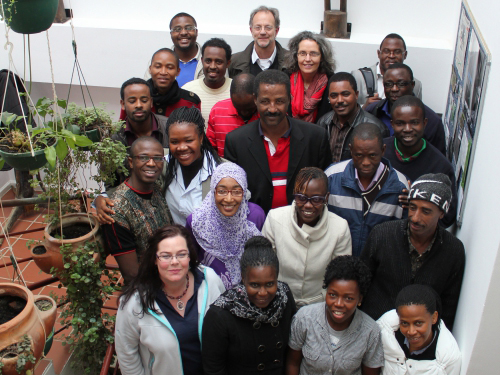 Over two weeks starting 24 July, 16 prospective candidates for the Transdisciplinary Doctoral Programme coordinated by the TsamaHub participated in a Winter School on Transdisciplinary Research. The candidates came from Nigeria, Ghana, Tanzania, Kenya, Zimbabwe, Ethiopia and South Africa. Most of them are employed as academic staff and they have all been offered bursaries via the TreccAfrica Programme to study for their Phds on a full-time basis over three years.  Lectures were delivered by a range of experts, including Professor Coleen Vogel who is a climate change expert and former member of the IPCC; Dr. Youba Sokona from the African Climate Change Policy Centre based in Addis Ababa; and Dr. Kevin Urama from the African Technology Policy Studies network based in Nairobi.

The research topics are as follows:

Nusrat Begum from Kenya will explore new ways of treating polluted water using nanotechnologies and fibres from the Moringa plant.

Uche Okpara from Nigereia will study the relationship between climate variability and the shrinking of Lake Chad, with special reference to unsustainable use of water resources and resource conflicts.

Alem Gebru will investigate how laser technology can be effectively used to measure concentrations of pollutants in the atmosphere.

Christelle Terreblanche from South Africa will use material flow analysis to re-examine the South African economy as a basis for evaluating the new green economy policies and their implementation.

Bariagabre Solomon Abera from Ethiopia will study ways to restore African drylands using the cactus pear – if successful, this will benefit millions of Africans who depend on the drylands for their livelihoods.

Samuel Adu-Acheampong from Ghana will examine the effect of climate change on the biodiversity of insects, with special reference to bees and mosquitos.

Paschal Mugabe from Tanzania will study the effects of climate variability on food security in Tanzania, paying attention to the impact of changing rainfall patterns on food production.

Patience Umeugochukwu from Nigeria will conduct her research on how the organic matter in palm oil effluent (which is a waste product) can be used to restore degraded soils.

Hamis Nnungu from Tanzania will study the effect of drought and heat on tomato production and he will investigate the role that Volatile Organic Compounds could play in building up more resilient tomato varieties.

Hope Otsyina from Kenya is a vet who would like to establish the existence of a new desease called Plastic Waste Desease in animals that are now in urban areas as a result of rural-urban migration caused in part by climate change – he will study animals who have eaten plastic waste and how this affects the livelihoods of the people who depend on these animals for food.

Alem Abay from Ethiopia will focus on ways to improve land-use efficiency in Northern Ethiopia, working closely with small farmers who face many problems as a result of changing weather patterns.

Silent Taurayi from Zimbabwe will study the most effective ways that smallholders can restore their soils using organic farming methods.

Lorraine Ambole from Nairobi will conduct detailed micro-studies of social innovation using new modes of sustainable design – this will include an analysis of community-based design interventions and the co-production of innovations.

Jemil Tadesse from Ethiopia is an economist who intends investigating how micro-insurance systems for small farmers can reduce risk and uncertainty in ways that could translate into improved production.

Anne Etsey from Ghana intends to examine how the micro-biological properties of natural cocoa (which is produced in large quantities in Ghana) can be used to treat diabetes.

Tendwa Orupa from Tanzania is interested in the relationship between climate variability, the increased incidence of flooding and the economic impact on infrastructure.