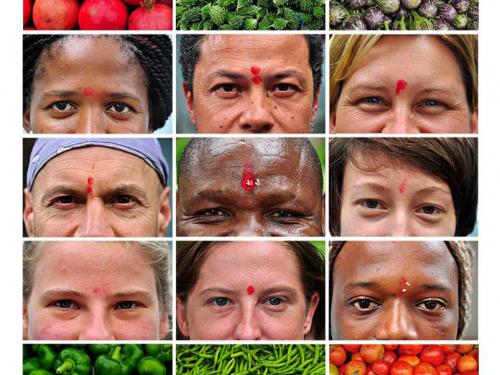 For the first time this year a group of Masters students travelled to India, hosted by Prof Tarak Kate, to study for their agro-ecological modules. Abigail McDougall was one of them and she wrote the following story:

The SI Explorers in India: fertile ground for learning
The train rattles and shakes, rattles and shakes. Night hurtles past the window, vast, full of the unknown. Nine travellers from four continents are aboard the Howra Mail from Mumbai to Wardha Town, Maharashtra Province, a tiny dot in the middle of the map of India. Day breaks. The train creaks to a halt, and the first ever batch of SI Explorers disembarks into the bright, humid heat. It is day one of the Globalised Food Systems and Sustainable Agriculture module.

The programme took place at Dharamitra Organic Experimental farm and was hosted by Dr Tarak Kate and his team. Dr Kate is an expert in soil health and innovation for small-scale sustainable agriculture. Dr Kate and Luke Metelerkamp, the SI Explorers co-ordinator, adapted the module to both the specificities of India and the goal of learning immersively, experientially, and exploratively. It was stretched over two full, busy weeks, grounded in lectures by Luke and Dr Kate, animated by guest speakers, fleshed out by field trips, and flavoured with Indian tastes, sights, and sounds.

Each day began with an echo of the SI: a reading, a stretch, and then morning work. Sonali Phate, a local soil scientist, instructed the team, artfully weavingtogether the science, practicality and ancient wisdom of organic farming. Morning work involved planting a kitchen garden, learning to compost, preparing a seed coating to ward off pests and stimulate growth, learning how to gather vermiwash (and what it’s for), and experimenting with biopesticides.

Next in the typical day were the foundational lectures by Luke and Dr Kate. Luke outlined the context of globalised food systems and food security. Dr Kate introduced us to the 6000-year-old history of Indian farming and the effects of the Green Revolution from the 1970s onwards. Chemical farming is becoming more expensive as the degraded soils require increasing inputs, yet the barriers to organic farming remain high. Farmers are unable to get a good return on their crops as the price is set by the government. Dr Kate emphasised that biodiversity within both the soil and the crops is required, yet most farmers only grow one or two cash crops. The South African situation is different in terms of scale –as 98% of Indian farmers work less than four hectares of land – yet many of the basic challenges are the same as the pressures on farmers are globally linked. The field trips and guest speakers illustrated and brought to life these tensions and macro-dynamics.

The guest speakers sketched in the details of the multiple causal chains of the food system, and its effects on nutrition and social life.The group was introduced to diverse topics: from shifting patterns of eating and the effect on nutrition, to the economics of agriculture and the structural exploitation of farmers in India, to the challenges of re-introducing locally suited varieties of cotton in competition with the genetically modified BT cotton that is supported by mainstream agriscience and big business.

Field trips created the final layer of learning. Most days featured a bumpy jeep ride to a far-flung village or farm, where sights, smells and stories created visceral, vivid lessons. Field trips illustrated different points in the value chain, and opened up an endless stream of questions attempting to link the sights and sounds to the pages and PDFs of the classroom. The group visited an organic farm and a and chemical farm, a village-level dairy cooperative and a district level distribution centre, a chemical input salesman, an industrial cotton mill, and a series of wholesalers and retailers of fresh produce, sugar and oil, and grains. Stories told in context weave national political life and personal private daily life. The abstractions of theory fall away. Globalised agriculture becomes the roar of industrial spinning machines making cotton for export only. Food security is the full, dusty smell of a shop holding a year’s worth of grains. These daily journeys into the realities of the Indian food system enabled the knitting together of theory and life, of abstract questioning with practical engagement.

The result was a learning experience that was rich, alive, and diverse: similar to healthy soil. Theoretical concepts are not unlike seeds – they hold coded meanings, and potential. Seeds need sun, water, and good soil: kept in a packet or a laboratory they desiccate and their potential is stifled. Concepts, confined to the classroom or page, suffer the same fate. They, like seeds, need the stuff of life to germinate, put down roots and send up shoots, to have a real function and become useful.  Concepts too need exposure to the sun or storm of human failure and success, to the uncooperative realities of nature, and the discovery of whether or not the soil can support the seed. Without immersion in the mud and mire of real life, theories remain theories. The first batch of SI Explorers was able to take some theoretical seeds and immerse them in the difficult soil of India, and allow them to put out tentative, questioning shoots.

Two weeks have passed since the SI Explorers stepped blinking into the Indian sun. Their journeys have diverged, but each treads the road a little differently.