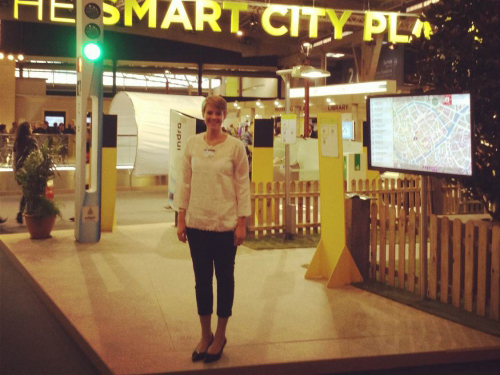 Barcelona has declared itself the global capital of the SMART City agenda. To this effect it hosts the annual SMART City Expo World Congress, 19-21 November, 2013. Pieter Van Heyningen (PhD student working on innovation) filled in for Mark Swilling as a speaker on Livable Cities, and Megan Davies (Mphil student working in urban infrastructures) also attended. For a Guardian article that quotes Van Heyningen, click HERE.

Here are Megan’s reflections on her experience:

“My first introduction to the smart city discourse was during the Corporate Citizenship module earlier this year when Pieter van Heyningen from the Stellenbosch Innovation District (SID) presented the organisation’s conception of ‘smart’: “where local challenges are seen as global opportunities for innovation, entrepreneurship and enterprise development for a smart and sustainable world”. Since then, the narratives of cities and the exploration of conceptions of urbanism have captured my research interests around urban sustainability. A few months on, in my capacity as an intern for the SID and an MPhil candidate of the Sustainability Institute, I was able to attend the Smart City Expo World Congress in Barcelona, Spain from the 19th till the 21st of November.
Barcelona, a leading smart urban landscape, is a fitting location for a smart city event. The annual congress, now in its third edition, attracted over 3000 delegates and hosted around 300 experts representing more than 400 cities from across the world, though mainly from Latin America, the United States and Europe. There was little representation from Asia, surprisingly, and none whatsoever from Africa; bar Pieter, myself and Derek Morgan from Ethekwini (Durban) Municipality. As well as the conference component, the congress boasted an impressive and eye-opening exhibition where 162 companies had the opportunity to showcase their smart innovations and solutions spanning every aspect of city governance, planning and management. The event was as much an ideas-sharing opportunity for leading smart practices as it was about presenting and selling solutions for cities to achieve a smart city status. Overall, the congress had around 9000 visitors which attested to its attraction as an opportunity for cementing partnerships and business opportunities; the business of smart is a lucrative one.
The congress was a rich learning experience and I embraced the opportunity to attend a variety of sessions, panel discussions and keynote presentations. There were also a host of side activities which took place in the Smart City Plaza, a ‘piece of a future smart city equipped with the most representative elements of the sector’ and it was fascinating to be privy to the informal discussions which happened in this futuristic urban space; an IBM-branded City Hall in the centre of the square, electric cars and green park space flanking it. This somewhat utopian experience of smart city space in the future was brought to life with the Barcelona Smart City Tour which took place each evening. Delegates could be taken on a tour of the city which showcased some of the impressive smart technology applications propelling Barcelona towards the realisation of their smart city vision. Our tour on the bi-articulated bus saw us interact with a smart bus shelter and train station and illustrated the power of the integration of ICT into the functionalities of the everyday urban experience, from lighting to mobility.
The three day conference presented an impressive program, anchored by three exceptional keynote addresses from Kent Larson, the Director of the Changing Places research group at the MIT Media Lab, the award-winning author of The Rise of the Creative Economy, Richard Florins and the acclaimed Amory Lovins from the Rocky Mountain Institute. Plenary sessions saw panel discussions on each of the seven conference themes although I often found these somewhat contrived, lacking critical engagement with the smart city notion. It was for this reason I was excited by Anthony Townsend’s presence in a session, ‘The Co-City: collaboration, entrepreneurship and creativity’. As the author of Smart Cities: Big Data, Civic Hackers and the Quest for a New Utopia, he offered a critical perspective on the role and impact of technology for cities and economic development. It made sense to remind myself that the congress was in fact an opportunity to set the stage for a smarter world, punting and showcasing the smart technologies and solutions leading this change and addressing the critical urban challenges of the 21st century.
I experienced the most engagement in the themed parallel sessions and was particularly interested in the ‘smart society and collaborative city’, ‘governance and economy’ and ‘sustainable built environment’ streams. The other themes were concerned with energy, technology and innovation, mobility and city resilience and security. Pieter spoke at a session about Liveable Cities and explored the possibility of smart at the base of the pyramid, challenging the developed world conception of smart. It was a refreshing perspective given the fact that the smart solutions and platforms for transformation are premised upon urban conditions quite foreign to those across Africa.
The congress was a thought-provoking beginning to my research journey into the role of innovation and intermediaries for sustainability transitions in a South African context; the evaluation of the smart city discourse comprises an integral part of this exploration. The experience confirmed that the smart city discourse is but one of many narratives about cities; others might include the creative city, the resilient city or the intelligent city. The smart city is just one typology of cities and those that are equipped with the corresponding infrastructure, resources and capabilities could join the ranks of smart but the rest might have to find a more suitable and fitting discourse to guide and package their development trajectory. The tension lies in how these narratives fit together, the hierarchies and disparities they might engender.” – by Megan Davies, 30 November, 2013.