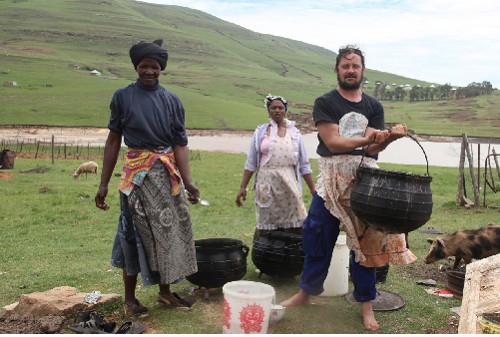 An Account by Berry WesselsBeing part of the Enkanini Community Engagement Group of the Sustainability Institute, ethnography through the method of participant observation can land one in odd positions. Since most people from the informal settlement of Enkanini in Stellenbosch come from the Eastern Cape or former homeland Transkei, I decided to spend December there in the village of Nqunqhu, to get a feel for the rural/urban difference.

I had 24 and a half hours in the taxi whilst going there to think what my real objective was. December is the month of festivities, rituals and ceremonies.  A time when many urban dwellers return from the cities to the great expanse of the Eastern Cape to be with their families and partake in community rituals that make men out of boys, women out of girls and satisfying the ancestors through Izilas or ritual ox slaughterings.

I decided to take a break from the continuous meat eating, thinking the ancestors must be impressed with my effort (We ate two oxen in one day).  So, I made my way to the ronda where Nozakhe was preparing Umqombothi, the local beer made from sorghum, maize flower and water.

I was quickly employed in the brewing process which is a five day undertaking and so I stepped into the world of women complete with apron, carrying pots to and fro.

Returning to the Cape, I realized that I developed a deep sense of respect for the Xhosa culture where etiquette positions one in society, consensus resolves problems and sharing strengthens the community.  My family even got larger,  especially the new brother that I gained, Mr Madiba Galada, who invited me to his world and gave me a glimpse into this fascinating part of our country.