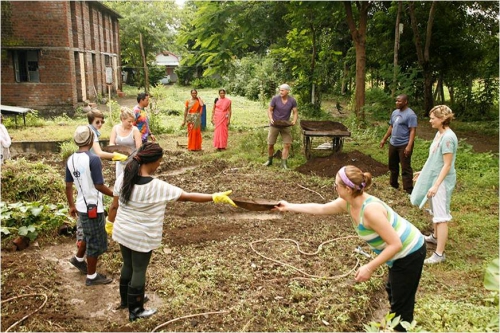 Learning from the Land in India – Luke’s Reflections

Luke Metlerkamp, co-ordinator of the Si Explorers Programme and leader of the agro-ecological module that was taught on the land in India working with farmers, wrote the following reflection on his experiences in India:

“We’ve had time to drop seeds into this rich black cotton earth and watch them grow.

Time to trust our hands into the care of earth’s crust. Elbow deep in wet animal excrement.

We’ve had time to be amazed. Again and again. Humbled, honoured and respected by people. This morning a woman who had been working cross legged on the concrete kitchen floor, day in and day out for the last two weeks shifted roles completely as she deftly assisted in guiding us through our soil tests in the on-site laboratory. Same humour, shy laughter and electric eyes. Electric eyes and crow black hair.

From the shade of a tree a bullock’s bell rings. Fatigue, despair and young hope.A nation asking what it means to be empowered?

The monsoon continues. Lighter now than before, gently on the tin roof. Cloaking the world outside, shifting focus inwards.

A plover calls. The sound takes me back to a sunny beach on the distant tip of another continent. The gecko shifts position around the light bulb and the ants take shelter from the rain.

Time shifts and bends. Some of the participants are observing a day of silence  – lunch is missed by one of the silent. Hours pass and she does not return. A search party is dispatched.

We find her reading, oblivious to our concern. On a plastic chair, in a teak forest.

Weeks pass by. Some days refuse to end, others never existed.

I see the whole story unfolding in front of my eyes, so clearly, in slow motion. They are coming. They are coming to India as they came for South Africa and they are coming for Africa just like they came for India. Some will prosper, most will suffer. Forests will disappear and rivers will vanish. Suspended in this dream state, I continue my life as before – unable to imagine the changes I need to make in order to shift the system. To be the pebble that changes the course of the river. Too lazy to take control and unwilling to let go. I am one of them. I am coming.

This is a profound experience. I sense the life paths of those around me creaking under the strain of revelations come late in life and full lives yet to be lived. Lungs gasping for fresh air. Fingers tearing at mouths full of cobwebs. A season change, nurtured by the deep fertile soils. Soon the rains will depart but the moisture will endure well into the blinding heat of the summer months to come.

How do I make time to stop to listen to that which does not shout?
The ringing and calling of which I no longer understand. Cannot comprehend. Could perhaps never comprehend. Language is learned, it is not something innate to all who are born. The capacity exists, but a vessel never filled remains barren.  How does one fill an ecological mind if there is even such a thing? Thought follows language and if we are to possess the capacity to think ecologically surely then too we must learn new languages?

My foot stops just in time, face frozen, eyes millimetres from its delicate black body suspended on an invisible web spun across my path. Pain and poison. Waiting, hunting, killing, eating.
Perhaps it shouts, and I do not realise I am listening.
The light shifts and passes ever so slightly into the west. Leaves rustle, sap flows and the worms glide their ancient pathways in the darkness below. I spin around the sun in a distant corner of the galaxy. Everything changes.
I wait. Staring, searching for some recognition, some confirmation of my own existence: it’s black body yields none.
I study the web, prod a strand with my finger: still no response.
I grow impatient, others are waiting for me. I wish they weren’t. I sidestep the web and make my way back to the classroom.
The silence lingers for some time. We carry it with us – an invisible badge from an invisible struggle on an invisible frontline.”