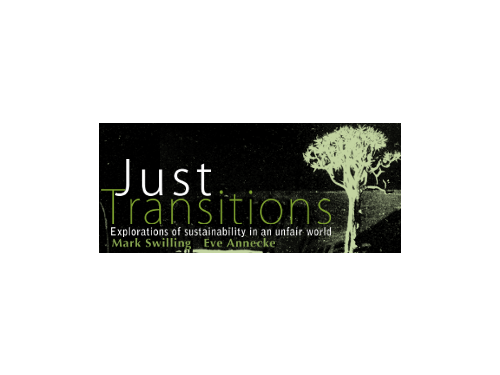 Just Transitions runner up in Harold and Margaret Sprout Award

Just Transitions: Explorations of Sustainability in an Unfair World co-authored by Mark Swilling and Eve Annecke has been awarded the runner-up prize for the Harold and Margaret Sprout Award. This award was established in 1972 and named in honor of two pioneers in the study of international environmental problems. According to the letter received: “The award is given annually to the best book in the field – one that makes a contribution to theory and interdisciplinarity, shows rigor and coherence in research and writing and offers accessibility and practical relevance. The competition was intense but I am delighted to let you know that Just Transitions was a close runner – up for the award.”

Praise for the book from the Committee included the following:
“Just Transitions does what few others even attempt—namely, redefine global environmental politics in a way commensurate with the nature of the problem, the speed and extent of current changes, and the urgency of transition. Their project is not one of marginal adjustment (either theoretically or politically), of global management for global problems, of describing and critiquing current trends. Rather, it is one of anticipation, of projecting, of future. It is one that takes as integral to the current and coming politics both biophysical constraint and unjust benefits and impacts.

More substantively, they frame the problem not as ineffectual management, nor as excess carbon, inefficiencies or lack of technological innovation. Rather, they frame it as a “deepening global polycrisis” where no single approach will do, certainly not an exclusive top-down, managerial, more information, better-consuming, better technologies approach. What’s more, they zero in on that tricky nexus of the local and the global, arguing persuasively throughout the book for taking seriously “the transformative impact of niche innovations” especially at sub-national scales.

Their project is about seeing the world (as unjust, unsustainable and in radical transition), about framing the nature of the problem (now and into the future), and about informing practice, a major criterion in the Sprout award. The primary venues for such practice are cities, where not only are the populations but where key decisions are made. Moreover, they take very seriously issues of excess, deprivation, and the long term. The transition of the sort that is beginning to occur and, some of us think, will inevitably occur as biophysical and ethical contradictions mount, is so much more than material transition.
Finally, if “global” connotes, among other things, the global North and the global South, this is one work that effectively situates itself in both. It is not Northerners describing the South, Northerners describing the North, nor Southerners describing the South, what I take to be the normal patterns. Rather, it is simultaneously of, by and through both the North and the South.”