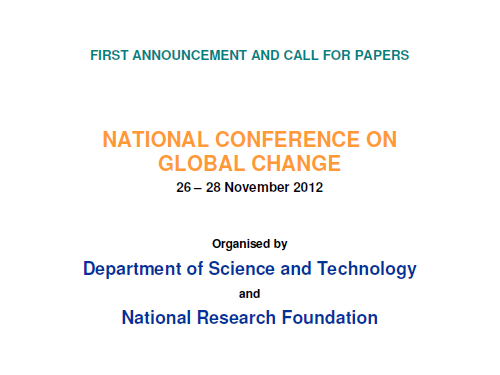 ‘Life has been around for 3.5 billion years, and we have been around for 200 000 – as we have become a force of nature, so has the extinction rate accelerated to unprecedented levels. This needs to change.’ This is how the Minister of Science and Technology, Derek Hanekom, ended his address to the 1st National Conference on Global Change. Global Change is one of the five ‘Grand Challenges’ adopted by the DST, each framing a ten-year investment programme in research and development. The others are energy, biotechnology, space and human/relations. Together, these Grand Challenges are South Africa’s most significant investments to drive what Minister Hanekom referred to as the transition to low-carbon employment creating a knowledge-intensive economy.

Attended by 250 delegates from Universities and Science Councils across South Africa, many of those in attendance had received funding via elevent grants made by the NRF for research on global change. Topics of the postgraduate researchers included themes as wide-ranging as eco-agriculture, GHG emissions monitoring, water-borne diseases, social learning, peak oil, sustainability-oriented innovations and the dynamic of the green economy.

The Global Change agenda was announced in 2001 at a meeting by scientists from over 100 countries when they all co-signed the Amsterdam Declaration. This moment marks what many refer to as the Second Copernican Revolution – the historic moment when new observation technologies and modes of social organization made it possible for the planet as a whole to be comprehended as a complex earth system. From this followed the consensus that the earth-system is under threat from the impacts of climate change, biodiversity destruction, and resource depletion. The solution is seen as a transition to a sustainable mode of production of consumption.

My keynote address to the first plenary drew on arguments that have been developed in my co-authored book entitled Just Transitions: Explorations of Sustainability in an Unfair World. My main message was that the global economic crisis was not a ‘black swan’ event. It can be understood by referring to five long-waves of economic development that have over the past 250 years followed distinct patterns: innovations that get supported by financial speculators, over-investments in new technologies result in bubbles that crash, followed by state interventions to pave the way for productive capital to drive the deployment of the new technologies as the basis for new modes of production and consumption.  We are now mid-way through the Information Age – a financial crisis that marks the midpoint of the 5th long-wave. While titanic struggles work themselves out as the solutions to the global crisis are contested, many argue that as 6th is just beginning – what could be called the ‘green-tech revolution’ or what Sir Nicholas Stern calls the ‘next industrial revolution’.

In addition to a keynote address, Mark Swilling also delivered a paper in one of the parallel session entitled Rethinking the Science-Policy Interface in South Africa: Experiments in Co-Production of Knowledge at Different Scales. Similar to the paper delivered in October in Berlin, this paper reflected on 3 case studies, one of which was the process of formulating the Global Change Grand Challenge policy agenda. The other two being the Cape Town regeneration initiative and the iShack project in Stellenbosch.