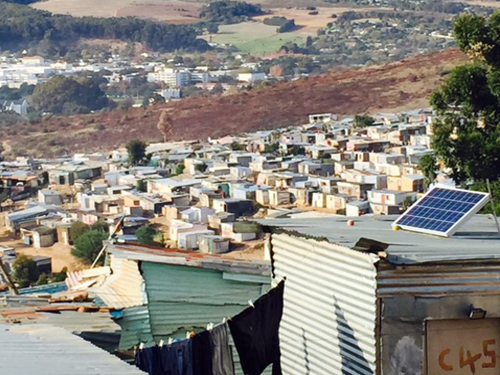 Energy in an informal settlement

Yesterday I spent the day reconnecting threads through walking. I visit first Andreas and our iShack project, in Enkanini. Part of pioneering this work, saw the setup of SIIL (Sustainability Institute Innovation Lab, a for-profit company as one of the steps into contributing to the SI as an entrepreneurial venture). Louise and I set it up as directors a few years ago, and now it’s Damian and I who are directors. I’m struck at the intricacies that make up the SI – relational, process oriented, and careful attention to the institutional details that underpin magic making. The iShack is run through SIIL.

I like very much the small stories that make up everyday life. As we walk over the caveats that make the unpaved road, I realise there’s something about the iShack project that bothers me. It’s to do with glossing over the things that go wrong. Rapidly becoming a poster child of sensible development, there seems to be a tendency to lean into a grand narrative – not by the project team. But by the story-tellers around the project.

In the road where the iShack is based, I notice immediately that more shacks are painted – beautiful colours. Nothing to do with us, smiles Andreas. Another charity-based NGO came in and painted. While we know ‘that kind’ of development is politically incorrect, the street has a freshness it didn’t seem to have before. The research centre we built ecologically, to be a little hub of tours, meals and meetings is a mess outside. Instead, it has become the home of the supposed entrepreneur who was to energise this small business. I see him, he avoids my eye and barely greets.

No, says Andreas, I don’t use the research centre for meetings anymore – it just feels like someone’s home. He looks a little apologetic. He points to the tiny church across the way. That’s where I like to arrange meetings now. It’s neat, pristinely maintained and painted a crisp blue and white. The elderly pastor is sweeping the church yard, slowly and rhythmically. I feel calm watching him, with the small church vegetable garden as his backdrop. Andreas introduces me, and there is a quiet respect between the two. Andreas tells of a humble R60 fee to rent the church as a meeting space – and that last week a group of African participants of the African Utilities Week filled the church with gruelling questions, rigorous engagement and exhausting quest for detail. The iShack held up, the solar panels on the pastor’s shack a small testimony.

In the iShack hub, we find two young maintainers. There is only one of the original team of hub operators left. Dreamed of as iShack entrepreneurs, with the original idea being that these operators would have capacity to run a portion of the iShack on a franchise model, the South African disease of conflictual strike took over. Illegal strike, dialogue failing, and 4 agents choose unemployment and living off government grants rather than a longer view of income generation. I get that despair I always get when something simply seems stupid. Most of the new agents seem to truly love their job. They like making clients happy, they say. We have however realised that the agents work for the project for a living, it is work. Spending too much time on the ‘grand vision’ and why this is so exciting for the project team… doesn’t pay the bills. It’s not that important to them. Where does it come from – that feeling of joy in work? I remind myself why the SI has been immersed in early childhood development, specifically a Montessori approach, for the last 2 decades. The transience in staff mirrors perhaps the transience in this impermanent community – always on the move. The investment in capability takes on a different hue. We visit a shack where an installation is taking place. The installers seem pleased with the interest shown – 2 indoor lights, an outside security light, a cell phone charger and a tv is extraordinary for a shack-owner who may never get a brick and mortar home and electricity. 32 years average wait in other parts of the country for the promised home from government. It encourages people to wait. Sit and wait.

Walking up the hill, I am in fits of laughter at the story of David and the chicken. A local chicken owner places blue gum branches in the road to rot, where his chickens then cluster to eat the insects this attracts. One rainy day, David, the iShack field operations manager, had the bad fortune to kill one of the chickens as he was accelerating up the hill in an attempt to reach the top without getting stuck in the mud. The irate owner waved the dead chicken, entrails and all, in front of David – saying that this chicken was now David’s, at the cost of R400. No apology would appease. Not able or willing to pay the exorbitant dead-chicken rate, David raced off to Berry’s farm. A good while later and he returned with a live chicken, caught after running round for ages, to repay his error. All is well. And all in a day’s work.

At the top of the hill, Andreas tells me the story of the iShack’s first spaza shop client. He is Somalian, and at the height of the xenophobic attacks in South Africa and locally, arrived with his Xhosa landlord. The landlord owns the spaza construction. This unique situation prompted the project to have two signatories sign a contract – the landlord and the tenant – it just made sense. No big deal, except that in many other places the relationships between foreign nationals and South Africans are under extreme pressure, blowing up in violence and death. Andreas speaks softly of the respect between these particular Xhosa and Somali men in Enkanini. A business deal, no fanfare no fuss. Just simple good business. Forging relationships as it goes.

As we stroll back down the hill, I know why I become exhausted from words. Too many, too much room for manipulation, too much verbiage, fancy postmodern social construction and too little action, too little of what’s real.

This is where one closest to me works. I see evidence of him, and his stories, as I walk. 45 degrees centigrade as he stands in for the operators on strike. People who recognise him in Stellenbosch as ‘iSolar’. Learning as a middle-class human what it means to appreciate all he has.

Andreas and I are talking about how, as the systems and processes have become more mature, so they become simpler and clearer, yet still cater for the multitude of intricate scenarios that transient communities and unique living arrangements require.. We are aiming for 1500 installed solar systems by the end of the project. Maturation – what a wonderful word. And how it seems that we so seldom give things enough time to mature.

I shake my head in wry laughter at what’s coming next. The positioning of the shacks is not always ideal for the north sun that’s required for maximum efficiency of the solar panels. Some of the systems work perfectly. Some, however, are shaded by giant blue gums. David is working with the municipality to come and trim the branches to allow more sun to reach the solar systems on the roofs. The illegal electricity connectors are not so sure. They do thriving business from those very same branches and need them to stay exactly where they are – they are the vital support for the illegal wiring connections draped like webbing through the trees. The trees need their branches to stay where they are too. How to solve this?

I am filled with a kind of silent awe and respect. Everyday life in our solar business in Enkanini. There are no words for the feeling of connection, and being. Ben Okri writes: “the most authentic thing about us is our capacity to create, to overcome, to endure, to transform, to love and to be greater than our suffering”. To me, this means finding authenticity in the simple, beautiful and gritty, everyday-ness of every day.