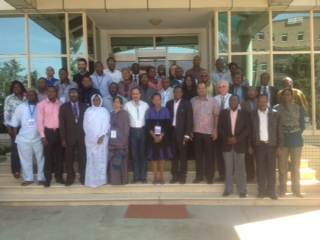 The Sustainability Institute is the institutional home of the South Africa Chapter of the African Technology Policy Studies network which is headquartered in Nairobi and headed up by Prof Kevin Urama (Extra-Ordinary Professor in the School of Public Leadership) (www.atpsnet.org). During the week starting 19 November, the ATPS held its annual conference and AGM in the new Chinese-built HQ of the African Union. Mark Swilling, as the SA Chapter Coordinator, attended the event and delivered a paper on the global economic crisis, sustainability transitions and the implications for Africa. A Communique at the end emphasized the importance of science, technology, and innovation for sustainable development. ATPS is one of the very few research-oriented networks that is imagined, organized, led and managed by Africans with virtually no external influence or interference. The large majority of talks and papers that were delivered were by Africans living and working on the continent.
After the dialogues on the 19th and 20th, the AGM took place on the 21st and the 22nd was devoted to an extra-ordinary discussion about how to build new modes of leadership on the African continent. Facilitated by Prof Vincent Anigbogu, this was a devastating self-critique of the counter-productive organisational cultures that are pervasive across the public, private and University sectors that stifle innovation, creativity, and visionary leadership. Drawing on well-known lessons from the mainstream literature on organisational learning and leadership, for the majority of the participants, this was their first exposure to this discourse. Unlike the sleepy disembodied meetings that are common at African meetings, this was a highly energised session – people were responsive, engaged, passionate, angry, attentive and self-reflectively honest. Clearly there is a need for much more of this kind of work on the continent.Whereas most South African professionals have lost count of the number of times they have been in such workshops, for many Africans in the room this was a much appreciated first engagement. As one grey-bearded Professor exclaimed standing up: “I have never heard anything like this. Our governments just close down space for creative thinking. When you apply for a job, all they look at is the CV. No-one considers anything else.” Another participant said: “This was the training of a lifetime. People here have been woken up. I cannot thank you enough for doing this for us. This is our time to shine. ”  (see footprints blog for more reflections)
← Previous NEws Post Next News Post →